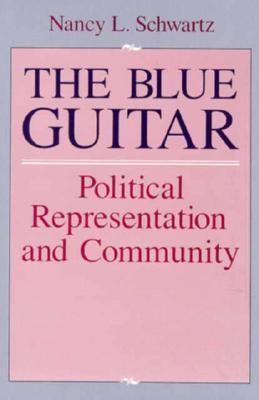 In that tradition, government is defined primarily in terms of power, and elections are little more than the means by which that power is transferred from the people to their representatives.In The Blue Guitar (the title alludes to a poem by Wallace Stevens), Nancy L.

Schwartz offers a radically new understanding of representation. As she sees it, representatives should be—and, in the past, have been—more than mere delegates or trustees of individual desires and interests and the process of representation more than the appropriation of power and control.

Ideally, representation should transform both representative and citizen. Representatives should be caretakers of the community, not the watchdogs of special interest groups or individuals. Citizens in turn should feel increased personal responsibility for the whole that membership in the community entails. Moreover, representatives should serve as founders of their constituencies, constituting communities whose members value citizenship as an end in itself.In her analysis, Schwartz canvasses the political experience of ancient, medieval, and Renaissance city-states to discover the communitarian meaning of citizenship, and she draws on classical political theory from Plato to Rousseau and Hegel, on the political sociology of Marx and Weber, and on such contemporary theorists as Arendt and Pitkin.

Schwartz also enters the controversy over whether local, state, and national legislators should be selected by district or at-large elections. After examining a set of key Supreme Court cases on voting rights and district elections, she proposes that representatives come from single-member geographic districts.

Comments
Comments for "The Blue Guitar: Political Representation and Community":