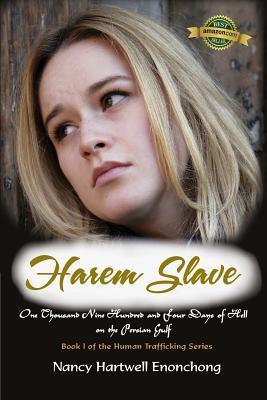 While visiting friends in Europe, however, she is abducted, and to her stunned disbelief, shipped to the Middle East and sold as a harem slave to an 81-year-old sheikh. He is scandalized when he discovers shes not the buxom Swede he ordered, and sells her to the brooding and cantankerous Sheikh Saud.

A year later, she becomes the property of Sheikh Fahd, who dyes the girls in his Rainbow Harem different colors- she is Miss Green. When Miss Purple furtively poisons him, she is bought by the handsome but mentally imbalanced Prince Ibrahim, who has been known to put slaves to death so he and his guests can enjoy their fresh corpses at his lavish parties.

Fortunately or unfortunately, instead of taking her into his own harem, he leases her to an elite gentlemens club, part of a dark underworld on the Persian Gulf where brothels cater to every taste, every perversion, every excess. She quickly learns that brutality, even in the nice clubs, is the norm: in the worst, life expectancy is calculated in weeks.

Disciplinary problems are threatened with being sent to a snuff club, where they are tortured to death as entertainment. To this point, Tammy has managed to adjust to slavery without completely negating her persona, but now, she almost comes unglued. She has no other choice, if she wants to survive, but to swallow her self-respect and obey orders. Its a constant struggle. She is proud of herself for not falling apart during one particularly horrible assignment - and then is immediately trundled off to another thats even worse.

How Tammy remains sane in this horrific environment is a tribute to the resilience of the human spirit, to the power of love toward those who deserve it the least, and to the defiant determination to find glimmers of joy - even lasting love - in a life awash with daily humiliation and degradation. Her caring heart, courage, and ability to understand her masters as fallible humans grappling with their own sets of demons are ultimately the keys to her salvation.

Comments
Comments for "Harem Slave: One Thousand Nine Hundred and Four Days of Hell on the Persian Gulf":