Jews Against Prejudice: American Jews and the Fight for Civil Liberties Stuart Svonkin 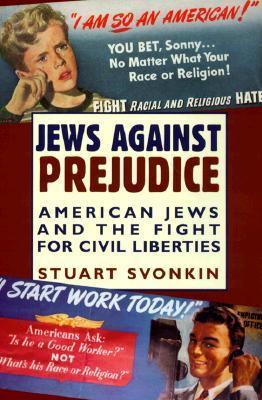 From the Depression to the late 1960s Jewish organizations--working as the leaders in a broadly based social and political movement--waged a determined campaign to eliminate all forms of discrimination and prejudice from American society.Stuart Svonkin delves into the archival records of Americas three major Jewish defense groups--the American Jewish Committee, the Anti-Defamation League of Bnai Brith, and the American Jewish Congress--to offer the first comprehensive account of organized Jewish political activism against bigotry and for human rights.

Jews Against Prejudice chronicles American Jewrys political ascendance, from the era before World War II, when Jewish defense groups first organized to fight mass anti-Semitism, to their emergence as the leaders of a liberal movement determined to address the nations most pressing political and social problems.Svonkin explores the impact that these Jewish groups had in the fight against racial and ethnic stereotypes. Beginning in World War II Jewish social scientists and other intellectuals began a concentrated effort to investigate the social and psychological bases of prejudicial attitudes, outlooks, and behavior.

By the end of the war these social scientists became convinced that all forms of prejudice, including anti-Semitism, shared the same social and psychological causes, which, if discovered, could be successfully treated and eliminated. For over twenty years Jewish intellectuals and activists worked hand in hand to formulate practical programs to combat prejudice. They pioneered tactics--including educational programs in the schools, appeals for tolerance broadcast through the mass media, and legal challenges in the courts--that remain among the principal weapons of todays civil rights activists.Svonkin shows how ideology and the shifting models of prejudice greatly influenced the means that each Jewish group used in its fight against bigotry and racism.He considers the far-reaching effects of anticommunism in the 1950s and early 1960s, when Jewish political groups moved to support liberal anticommunism as well as to oppose the demagoguery of such figures as Senator Joseph McCarthy and the leaders of the John Birch Society.

Exploring the tensions between American and Jewish identities, Svonkin argues that the revelations of the Eichmann Trial, the growing concern over Israels security, and the persistence of anti-Semitism all shaped Jewish activism-- driving the shift from the universalistic liberalism of the 1940s and 1950s to the cultural assertion and political neoconservatism of the late 1960s.

Comments
Comments for "Jews Against Prejudice: American Jews and the Fight for Civil Liberties":